The last young saint for our Lenten 2022 line-up is St. Maria Goretti. We have looked at the holy lives of a number of young saints: Jacinta and Francisco Marto, Chiara Luce Bandin, Dominic Savio, Carlo Acutis during the last few weeks. I chose St. Maria Goretti for Holy Week because like Christ while dying she chose to forgive her assailant.

Some of you may have viewed the relics of St. Maria Goretti in the fall of  2015. Pope Francis chose to send her relics to the United States on a tour before he opened up the Year of Mercy, December 8, 2015. St. Maria Goretti's relics were chosen because of her heroic act of forgiving her murderer on her death bed. The photograph to the left was taken of a picture accompany her relics.
Maria was born on October 16, 1890, in Italy. She was baptized the following day and named Maria Teresa. She was the oldest of six children. Her parents were faithful Catholics but very poor. When Maria was six years old the family moved to a location about forty miles south of Rome. Her father along with another family acquaintance, Govanni Serenelli, agreed to become sharecroppers on the acreage of a wealthy landowner.
Govanni Serenelli and his youngest son, Alessandro, lived in a duplex type home with the Goretti family on one side and the Serenellis on the other; they shared a common kitchen. In 1900, Maria's father was bitten by a mosquito and died of malaria. Maria's mother had to assume the work of her husband in the fields to raise crops for her family and the owner. Maria was left at age ten to watch her five younger siblings, make dinner, and clean the Serenellis' house and her own home.
In 1901, Maria made her First Holy Communion. She had many responsibilities for one so young, and she rose to the challenges capably. It was during this time that Alessandro attempted repeatedly to seduce Maria. He was eight years older than she and lived right next door. Maria refused his advances and reminded him that God did not want them to commit this mortal sin. Finally on July 5, 1902, Alessandro determined to rape her and if she did not comply to kill her. Maria fought back valiantly saving her virginity, but Alessandro was furious at her refusal to give in to him and he stabbed her fourteen times with a sharp instrument. Maria was taken to the hospital where her wounds became infected and she died the next day, July 6. Her last words were, "I forgive Alessandro Serenelli...and I want him with me in heaven forever." 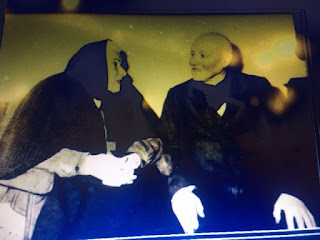 Alessandro was tried for his crime and sentenced to prison for thirty years. It was in 1908 while serving his sentence that Maria Goretti appeared to him in a vision. She was in a garden with fourteen flowers representing the fourteen wounds she had suffered. She told Alessandro that she forgave him and she offered each flower one by one to him. It was at this moment that his angel as he liked to call Maria in the years to come, brought him forgiveness and obtained for him the grace of a deep and permanent conversion. From that time on, he was a model prisoner full of God's peace. In 1929 he was released from prison and in 1934 he sought out Maria's mother, Assunta, and asked for her forgiveness for murdering Maria. She forgave him. Alessandro entered the Franciscan Capuchin Order in 1937 as a lay brother serving as a porter, gardener, and general laborer. During the canonization process for Maria, he testified to her heroic virtue and martyrdom. 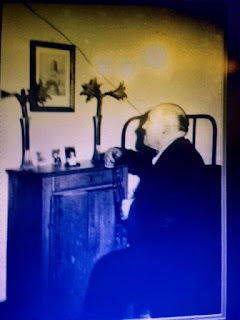 As we enter Holy Week, we might reflect on St. Maria Goretti and her mother's spirit of forgiveness. Both forgave Alessandro. Let us turn to St. Maria and ask her to help us have a merciful and forgiving heart. It can be very hard at times, but few of us are asked to forgive as Maria and her mother have forgiven. St. Thomas Aquinas tells us that, mercy is "the compassion in our hearts for another person's misery, a compassion that drives us to do what we can to help him. (Summa Theologica II-II,30.1) It would have been so easy for Maria and her mother to see only how Alessandro had violated their rights and dignity, but instead they looked at him and saw the darkness and misery his soul was in. Maria forgave him on her death bed and interceded with God for him. Assunta forgave Alessandro and extended her forgiveness to such an extent that she called him her adopted son in future years.
These young saints of our Lenten posts give us much to think about as we prepare for Holy Thursday, Good Friday, and Easter. May they help us to grow ever deeper in our love and faithfulness to Jesus.
Wishing you and your families many graces during the Triduum and a Joyous Easter!
Prayers to Maria Goretti
O God, author of innocence and lover of chastity, who bestowed the grace of martyrdom on your handmaid, the Virgin Saint Maria Goretti, in her youth, grant, we pray, through her intercession, that, as you gave her a crown for her steadfastness, so we, too, may be firm in obeying your commandments.
– The Roman Missal

Saint Maria Goretti, strengthened by God's grace, you did not hesitate, even at the age of twelve, to sacrifice life itself to defend your virginal purity. Look graciously on the unhappy human race that has strayed far from the path of eternal salvation. Teach us all, and especially our youth, the courage and promptness that will help us avoid anything that could offend Jesus. Obtain for me a great horror of sin, so that I may live a holy life on earth and win eternal glory in heaven. Amen.