St. Agnes' feast day is January 21. A young martyr of the Church of Rome, Agnes lived during the persecution of Diocletian. Born in 291 AD, she died on January 21, 304. As with most of the saints from the early Church, little is known; however, it is believed she came from a wealthy family, was beautiful, and sought after by many young men. She had made a promise to Jesus as a young girl to be a bride of Christ, which outraged a young suitor. He went on to report her as a Christian to the authorities.
Agnes was given opportunities to recant her Christian faith, which she did not do. Finally, she was sentenced to death. Legend has it that a variety of tortures were attempted, but all failed except the last which was death by a sword. It is not certain whether Agnes' head was cut off or if she was stabbed in the throat. All accounts have people wiping up her blood, for her brave act was viewed by fellow Christians as heroic, worthy of emulation, and her flesh holy, worthy of honor. St. Ambrose, 340 - 397 AD, bishop of Milan, referred to St. Agnes as a model for the young in her virginity and steadfastness in the faith.

With young children, you might want to spare the gory details of St. Agnes' death and focus on her brave witness and and love of Jesus. 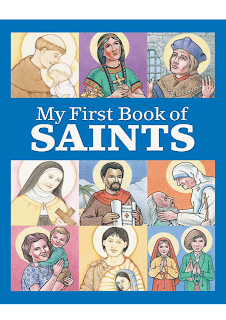 This book is by Muldoon and Wallace and can be purchased at Pauline Book and Media. It contains 62 short stories on many popular saints, among them St. Agnes.
Years ago, our family had a book from Pauline Book and Media by M.R. Berardi and illustrated by De Luca called Saint Agnes. It told the story of St. Agnes' life and martyrdom for children. The illustrations were beautifully and tastefully done. Unfortunately the book is no longer available. You might find it if you search for it, but most of us do not have the time to do anything but a brief look online.

St. Agnes is the patron saint of young girls and of chastity. On her feast day it is customary for two lambs to be brought in to the Pope to be blessed. On Holy Thursday they are sheared and the wool is woven into a pallium to be given to a newly consecrated archbishop. A pallium is a vestment worn around the neck which denotes ecclesiastical authority.

Protect the Young
Small Yellow Cross
O Little St. Agnes,
so young and yet made so strong
and wise by the power of God,
protect by your prayers
all the young people of every place
whose goodness and purity are threatened by the evils
and impurities of this world.

Give them strength in temptation
and a true repentance when they fail.
Help them to find true Christian friends
to accompany them in following the Lamb of God
and finding safe pastures in His Church
and in her holy sacraments

May you lead us
to the wedding banquet of heaven
to rejoice with you and all the holy virgin martyrs in Christ
who lives and reigns forever and ever. Amen.

In lieu of a recipe, I am offering a link to a summary poster of ancient Roman foods. It was researched by an intern at the Smithsonian. I hope you will find it informative as we reflect on the life of St. Agnes lived during the first centuries of Christianity in Rome.