In Honolulu in front of the state capitol building is a statue of Joseph de Veuster, better known as St. Damien of Molokai. At the Capitol Building in Washington, D.C. in Statuary Hall along the Hall of Columns stands another statue of the same man. Belgian born, Fr. Damien spent half of his life serving in the Hawaiian islands. In Rome on October 11, 2009, he was canonized by the Catholic Church for having lived a life of heroic virtue.

Fr. Damien's life is a standout by anyone's measure. He is known for his work with the lepers on Molokai, an island in the Hawaiian chain. A work he began at age thirty-three and which ended at his death from leprosy in 1889 at the age of forty-nine.

John Farrow's Damien the Leper reissued in 1998 is an engaging biography of the Belgian missionary in Hawaii. Farrow who is known for Thomas More and the Pageant of Popes was a Hollywood screenwriter and director. His biography excels due to his talent for writing and ability to tell a story well. Farrows early life was adventurous taking him to the Hawaiian Islands as a young sailor. It was there that he heard the remarkable accounts of Fr. Damien the Leper Priest. Intrigued by what he heard and having received a copy of Robert Louis Stevenson's defense of Fr. Damien - a response to the slanderous accusations of the Rev. Dr. Hyde - he proceeded to Belgium and France to research his early life. Returning to the Pacific, he continued the research and then wrote a lively and inspiring book. It first appeared in March of 1937. Damien the Leper 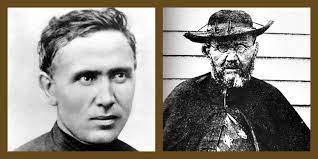 Who would imagine when you look at the leprous face of Fr. Damien today that he was once a  handsome youth physically fit from working on his father’s farm? His Hawaiian parishioners from Puno and later Kohala on the island of Hawaii would. He served these parishes between ages twenty-four and thirty-three. They had never seen anyone with a work ethic like Fr. Damien. Farrow details what he was up against in terms of the Hawaiian terrain, relaxed work ethic, and pagan traditions. His parishioners responded to him with love and generosity. Many Hawaiians embraced the faith. His superior, Msgr. Maigret, was well-pleased when he visited the young priest during these years.

When Msgr. Maigret called for priests to serve the lepers on Molokai Fr. Damien was one of four to volunteer. The good monsignor could not bring himself to insist any of his priests serve there since he knew it was a certain death sentence. Instead he asked for volunteers. Damien was chosen because of his record of success in the parishes of Puno and Kohala. The term he was to serve was described by Msgr. Maigret as “You may stay as long as your devotion dictates.”

Fr. Damien said of his calling “Divine Providence will assist me in this work, because it is solely for the good God that I work…” In his characteristic style he threw himself completely and passionately into his work with the leper colony. He lived, ate, breathed and worshiped with the lepers. He exhausted himself building and furnishing the church, erecting huts, establishing choirs, altar, and funeral societies, offering Mass, teaching the children, administering the sacraments, admonishing those guilty of immoral behavior,  begging state officials for basic necessities, in every way spending himself completely for his beloved lepers. Mahatma Gandhi said of him “ It was from Fr. Damien that I drew my social principles.”

His life with the lepers became known far and wide, not through any publicity he initiated but through those who saw and wrote about what he did. His life through his letters to his family and religious congregation, and from those who wrote of his work give us a good view of this saintly man. There are many saints who we know little about, but St. Damien like St. Therese of Lisieux’s  life is available for our inspection, edification and imitation. I have included the Kindle version of Fr. Damien and his brother, Fr. Pamphile letters below.

"Were it not for the constant presence of our divine Master in our humble chapel, I would not have found it possible to persevere in sharing the lot of the afflicted in Molokai...The Eucharist is the bread that gives strength...It is at once the most eloquent proof of His love and the most powerful means of fostering His love in us. He gives Himself every day so that our hearts as burning coals may set afire the hearts of the faithful."

St. Damien, Pray that our hearts may be set on fire for the love of Jesus and the afflicted!

Damien of Molokai: Builder of Community

Father Damien and the Bells

Saint Damien of Molokai: Apostle of the Exiled

Life and Letters of Father Damien, Apostle to the Lepers

Father Damien, an Open Letter to the Reverend Dr. Hyde of

To learn more about the inspiring work St. Damien and St. Marianne Cope did on Molokai, visit this link:

The stars below are not related to any book, article, or mochi ice cream. They inadvertently were put on this blog post, and I can not figure out how to remove them. Please disregard them or have a chuckle on me!

If you are looking for a treat to celebrate St. Damien's feast day, I recommend mochi ice cream. If it is made with rice flour which mochi ice cream often is then it is gluten-free. Mochi ice cream is a popular treat in Hawaii. It is available in most supermarkets in the freezer case.