Home / Did You Know? 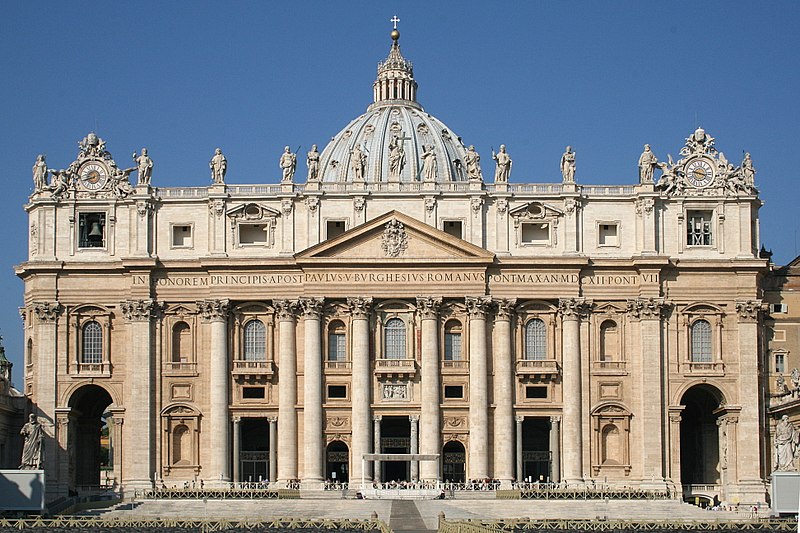 There are only five countries in the world where abortion is illegal in all circumstances: 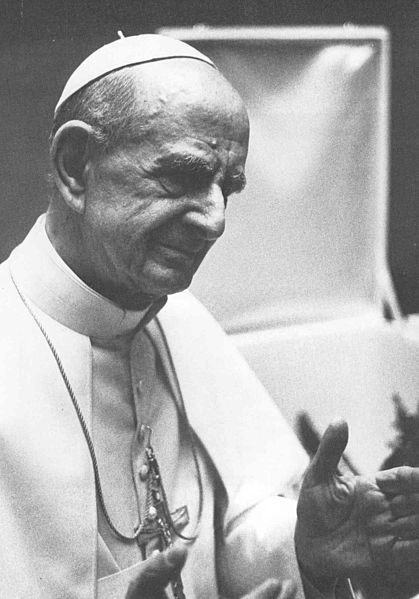 Humanae Vitae (Of Human Life) is an encyclical written by Pope Paul VI and dated 25 July 1968. The text was issued at a Vatican press conference on 29 July.

Vatican City is its own Country!

Vatican City, officially the Vatican City State or the State of Vatican City, is an independent state located within the city of Rome. With an area of 110 acres, and a population of about 1,000, it is the smallest state in the world by both area and population. However, formally it is not sovereign, with sovereignty being held by the Holy See.

Source is from Wikipedia 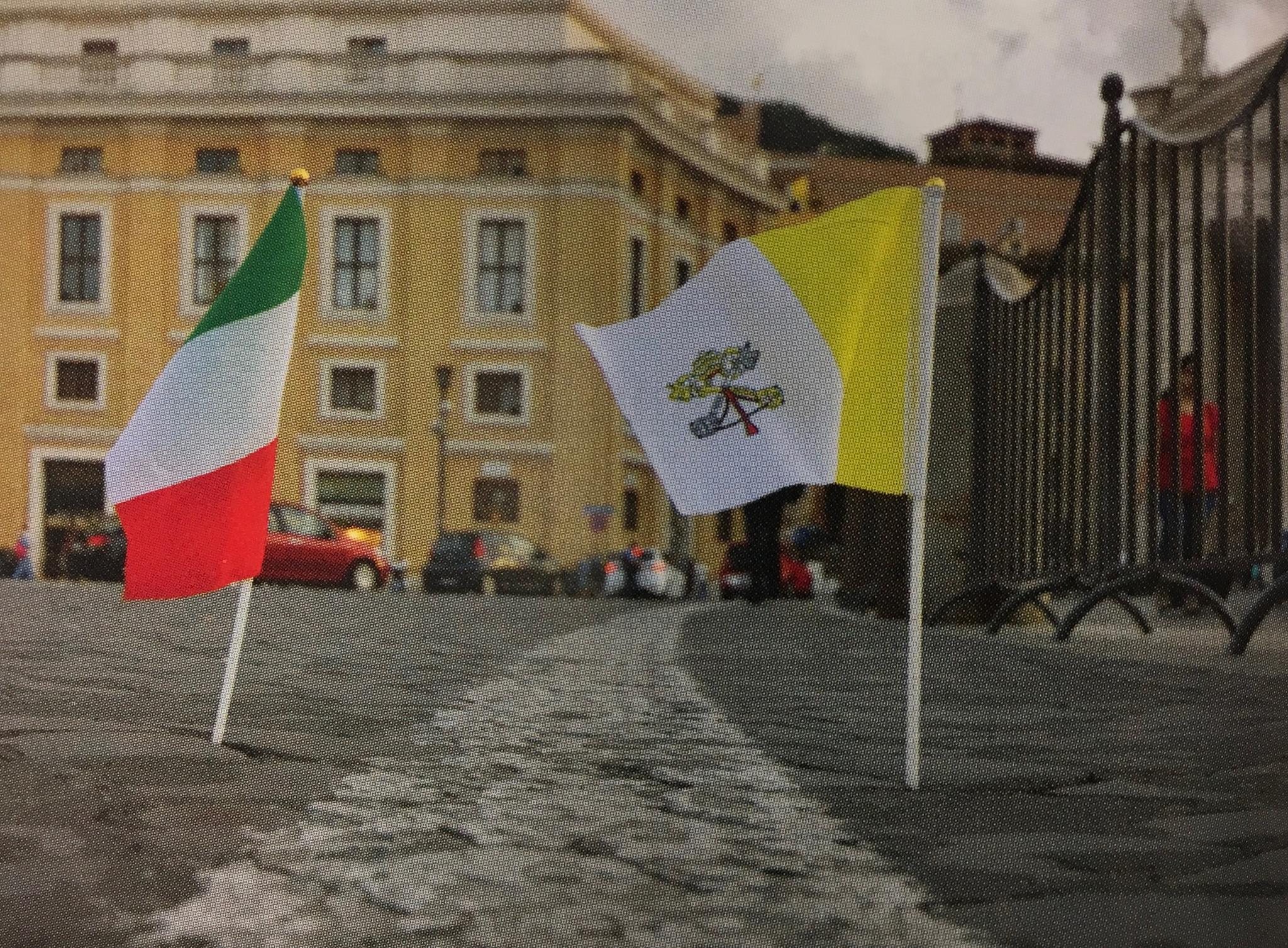 Vatican City is the smallest country in the world

At 109 acres, about eight Vatican City States could fit within Central Park in New York City. While the Vatican is small, its independence assures the Pope's freedom to teach and shepherd without coercion, interference, or hinderance from any other country or influence.

Source is from 101 Surprising Facts About St. Peter's and the Vatican.

Photo: Italy-Vatican City border from 101 Surprising Facts About St. Peter's and the Vatican. 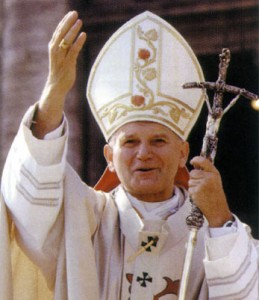 He was elected by the second Papal conclave of 1978, which was called after Pope John Paul I, who had been elected in August to succeed Pope Paul VI, died after thirty-three days. Cardinal Wojtyła was elected on the third day of the conclave and adopted his predecessor's name in tribute to him. John Paul II is recognized as helping to end Communist rule in his native Poland and eventually all of Europe.

He was one of the most traveled world leaders in history, visiting 129 countries during his pontificate. As part of his special emphasis on the universal call to holiness, he beatified 1,340 people and canonized 483 saints, more than the combined tally of his predecessors during the preceding five centuries. By the time of his death, he had named most of the College of Cardinals, consecrated or co-consecrated a large number of the world's bishops, and ordained many priests. A key goal of John Paul's papacy was to transform and reposition the Catholic Church. His wish was "to place his Church at the heart of a new religious alliance that would bring together Jews, Muslims and Christians in a great religious armada".

John Paul II was the second longest-serving pope in modern history after Pope Pius IX, who served for nearly 32 years from 1846 to 1878. Born in Poland, John Paul II was the first non-Italian pope since the Dutch Pope Adrian VI, who served from 1522 to 1523. John Paul II's cause for canonization commenced in 2005 one month after his death with the traditional five-year waiting period waived. On 19 December 2009, John Paul II was proclaimed Venerable by his successor Pope Benedict XVI and was beatified on 1 May 2011 (Divine Mercy Sunday) after the Congregation for the Causes of Saints attributed one miracle to his intercession, the healing of a French nun from Parkinson's disease. A second miracle attributed to John Paul II's intercession was approved on 2 July 2013, and confirmed by Pope Francis two days later (two miracles must be attributed to a person's intercession to be declared a saint). John Paul II was canonized on 27 April 2014 (again Divine Mercy Sunday), together with Pope John XXIII. On 11 September 2014, Pope Francis added these two optional memorials to the worldwide General Roman Calendar of saints, in response to worldwide requests. It is traditional to celebrate saints' feast days on the anniversary of their deaths, but that of John Paul II (22 October) is celebrated on the anniversary of his papal inauguration.

APOSTOLIC LETTER
ROSARIUM VIRGINIS MARIAE
OF THE SUPREME PONTIFF
JOHN PAUL II
TO THE BISHOPS, CLERGY
AND FAITHFUL
ON THE MOST HOLY ROSARY
See Letter - Click Here
See/Download as PDF

Source is from Wikipedia and Vatican.va. 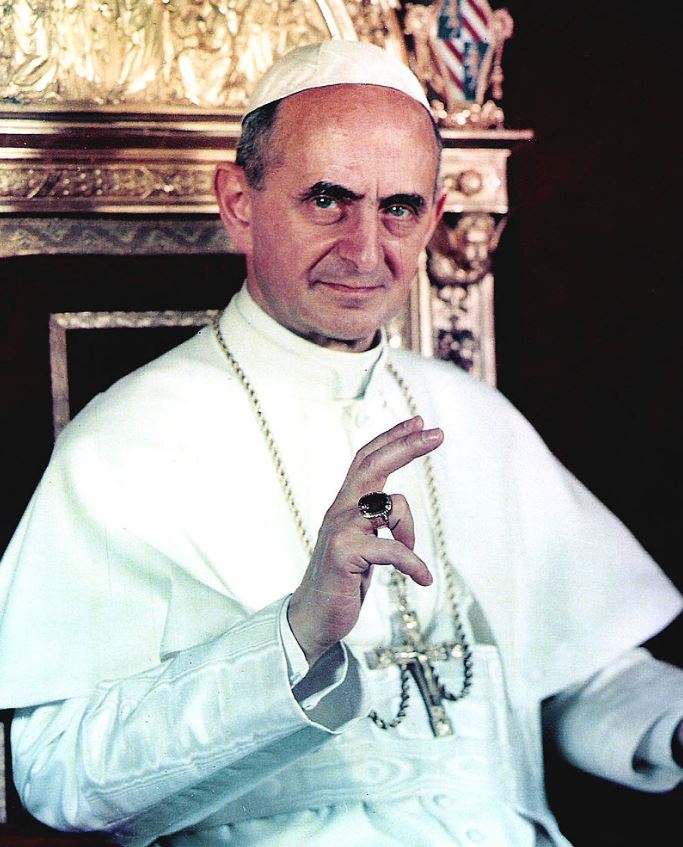 Pope Saint Paul VI (born Giovanni Battista Enrico Antonio Maria Montini 26 September 1897 – 6 August 1978) served as Pope from 21 June 1963 to his death in 1978. Succeeding John XXIII, he continued the Second Vatican Council which he closed in 1965, implementing its numerous reforms, and fostered improved ecumenical relations with Eastern Orthodox and Protestants, which resulted in many historic meetings and agreements. Montini served in the Holy See's Secretariat of State from 1922 to 1954. While in the Secretariat of State, Montini and Domenico Tardini were considered as the closest and most influential advisors of Pius XII, who in 1954 named him Archbishop of Milan, the largest Italian diocese. Montini later became the Secretary of the Italian Bishops' Conference. John XXIII elevated him to the College of Cardinals in 1958, and after the death of John XXIII, Montini was considered one of his most likely successors.

Upon his election to the papacy, Montini took the name Paul VI. He re-convened the Second Vatican Council, which had automatically closed with the death of John XXIII. After the Council had concluded its work, Paul VI took charge of the interpretation and implementation of its mandates, often walking a thin line between the conflicting expectations of various groups within Catholicism. The magnitude and depth of the reforms affecting all fields of Church life during his pontificate exceeded similar reform programmes of his predecessors and successors. Paul VI spoke repeatedly to Marian conventions and mariological meetings, visited Marian shrines and issued three Marian encyclicals. Following his famous predecessor Saint Ambrose of Milan, he named Mary as the Mother of the Church during the Second Vatican Council. Paul VI described himself as a humble servant for a suffering humanity and demanded significant changes from the rich in North America and Europe in favour of the poor in the Third World. His positions on birth control, promulgated famously in the 1968 encyclical Humanae vitae were often contested, especially in Western Europe and North America. The same opposition emerged in reaction to the political aspects of some of his teaching.

Following the standard procedures that lead to sainthood, Pope Benedict XVI declared that the late pontiff had lived a life of heroic virtue and conferred the title of Venerable upon him on 20 December 2012. Pope Francis beatified him on 19 October 2014 after the recognition of a miracle attributed to his intercession. His liturgical feast is celebrated on the date of his birth on 26 September. Pope Francis canonised Paul VI on 14 October 2018.

St. Pope Paul VI
Feast Day - September 26
We have him down on our Feast Day Page

Source is from Wikipedia. 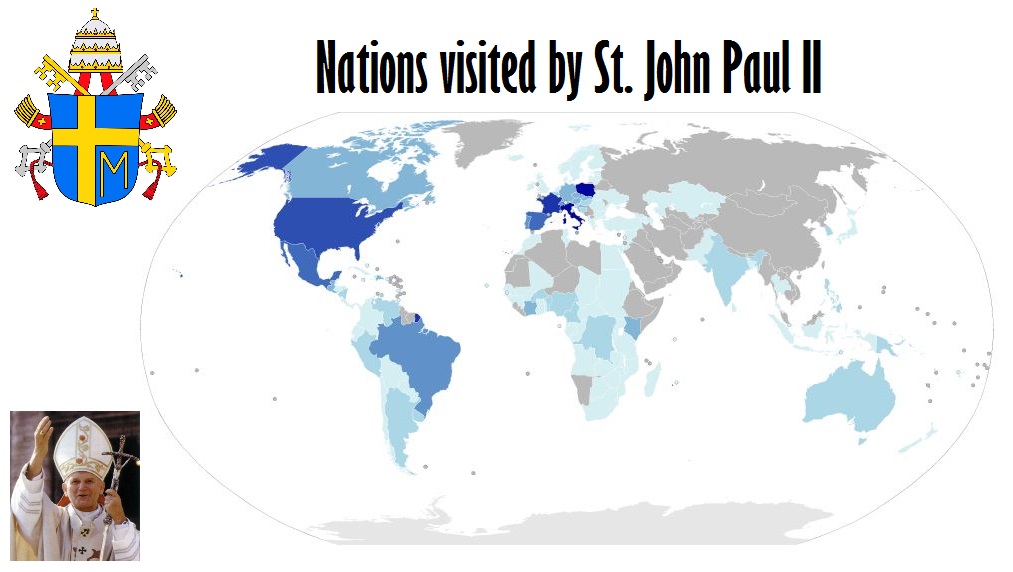 Pope John Paul II traveled to more than 129 different countries, logging more than 750,000 frequent flyer miles, which is about three times the distance to the moon.

In addition, John Paul II made 146 pastoral visits to Italy. 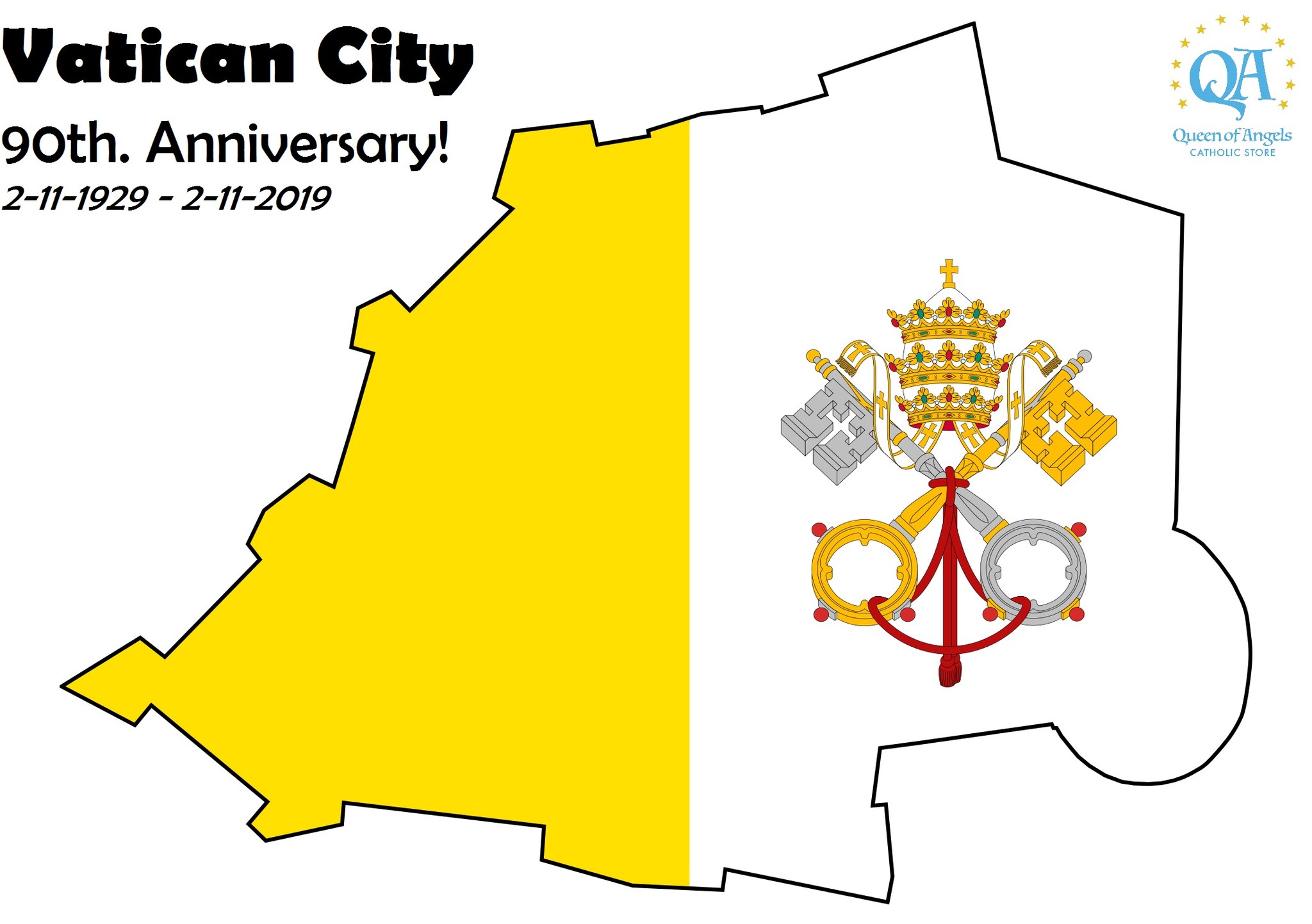 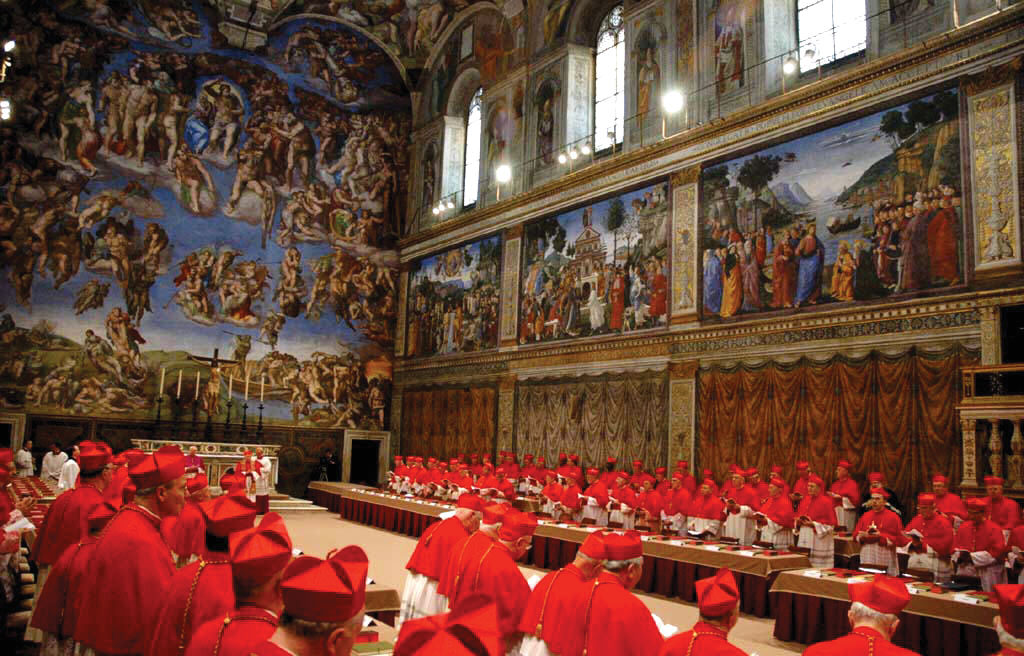 The Papal Conclave was created to hasten the election of a new Pope.

Roman Cardinals have had the exclusive right of selecting new popes since 1059. Early cardinals came mainly from Rome and nearby dioceses, but today's cardinals represent various nationalities. Due to the delays in electing popes, Pope Gregory X decreed in 1274 that the cardinals should be locked away until they settled on a candidate. Thus conclave essentially means to be "locked up."

The Diocese of Orlando is the Largest diocese in the world 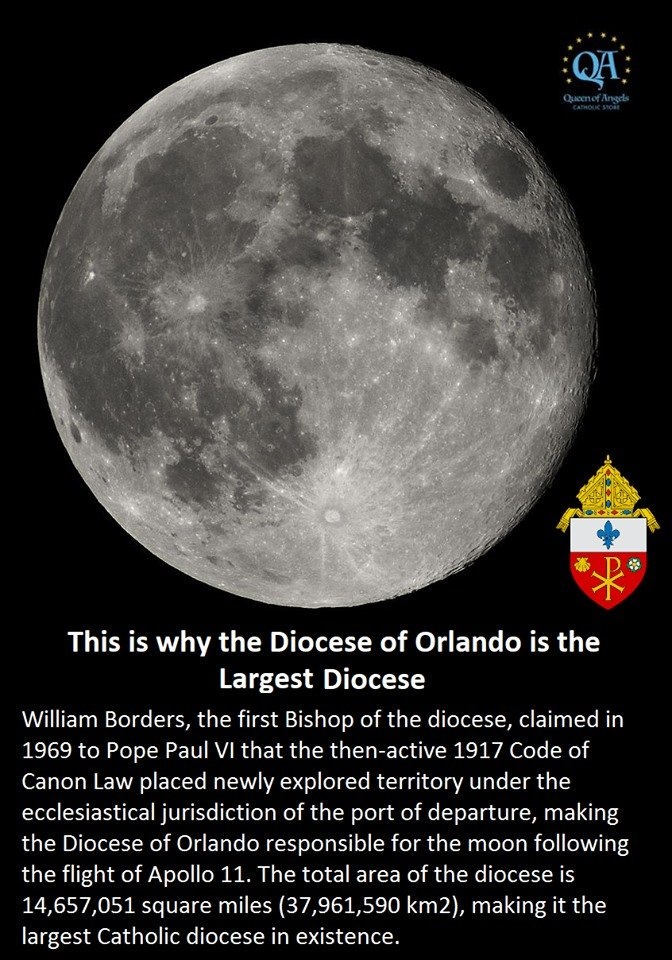 Did you know that the United States has 144 territorial dioceses? 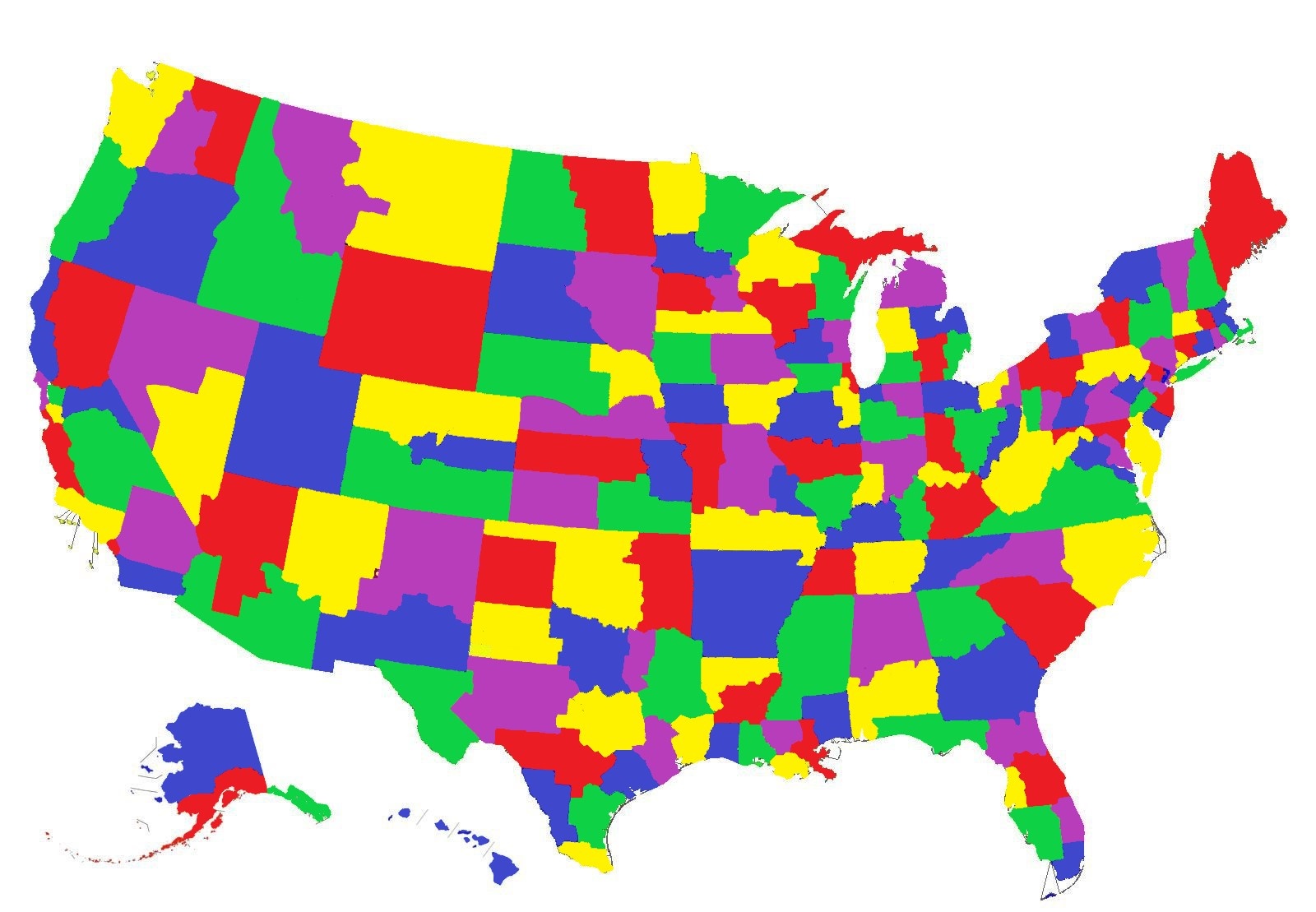 More facts Coming out soon near Newsletter send out date.