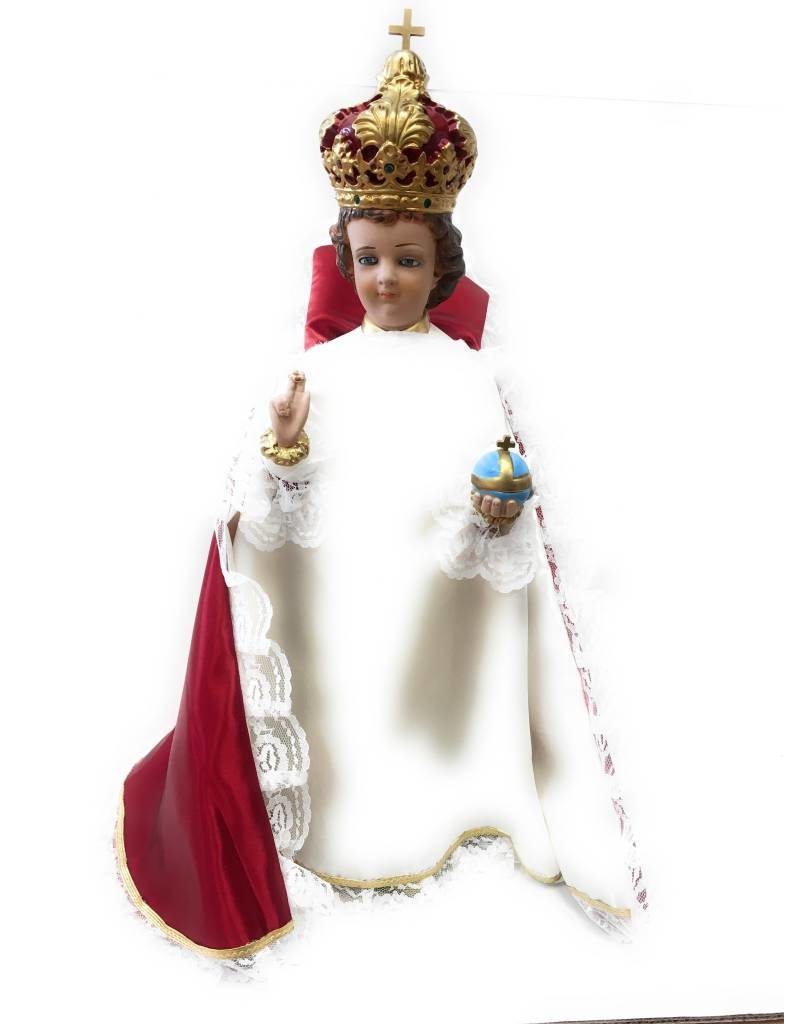 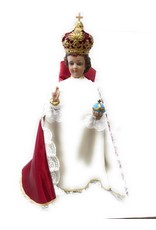 Our Infant Jesus of Prague Statue was Made in Italy and is 25” tall from the base to the Cross on the Crown. The Crown and the White ankle-length Tunic form part of this lovely 9 lb Plaster Statue. A Majestic Red Silk Cape with White Silk Tunic is included with the Statue and the Cost of the Statue. The Cape and Tunic are laced with white lace and gold ribbon. His right hand is lifted in a blessing and His left holds the globe. His countenance is majestic, venerable and grave, and His eyes are blue. The Crown has a 4.25 inch diameter, decorated with red and green gems. This statue is ideal for a home altar, Church or monastery. Draw grace powerfully into your home by honoring the Infant Jesus of Prague.

“The More You Honor Me, the More I Will Bless You.” Special devotion to this Divine Infant originated with the Carmelites in the city of Prague, Bohemia, in the beginning of the seventeenth century. In 1628, when the Carmelite Monastery had been reduced to poverty, owing to the ravages of war, Princess Polyxenia of Lobkowitz gave her precious statue of the Child Jesus to the Carmelites, saying, “I give you what I prize most highly in the world; honor and respect the Child Jesus and you shall never be in want.” The words of the princess proved prophetic, for as long as the Carmelites kept up their devotion to the Divine Infant of Prague, everything prospered with them. The Carmelites were later forced to flee from the city, and in the confusion of the war, they were unable to take with them their miraculous statue. The invaders seized the Child Jesus statue and threw it into a pile of rubbish.

In 1635, peace came to Prague and the Carmelites returned. One of them, Father Cyril, who had previously received great spiritual help through his devotion to the Infant of Prague, sought the statue and found it amidst the rubbish. Overjoyed, he again placed the statue in the oratory. Suddenly, the statue spoke to him. Father Cyril was stunned as he heard these words of promise: Have Mercy on Me and I Will Have Mercy on You. Give Me Hands and I Will Give You Peace. The More You Honor Me, the More I Will Bless You. The hands were later restored to the statue through the generosity of a devotee of the Divine Child. For more than three centuries, this promise has inspired a worldwide devotion to the Miraculous Infant Jesus of Prague. The original statue is still preserved in the church of St. Mary of Victory in Prague. St. Therese, the Little Flower, was a most fervent venerator of the Lord under this title.

Today, replicas and models of the small statue are honored in every part of the world. The list of blessings attributed by devotees of the Infant Jesus is endless: health restored, financial problems solved, gifts of peace of mind and soul, and innumerable healings, both physical and spiritual. God has been astonishingly generous in blessing those who have been devoted to his Infant Son.