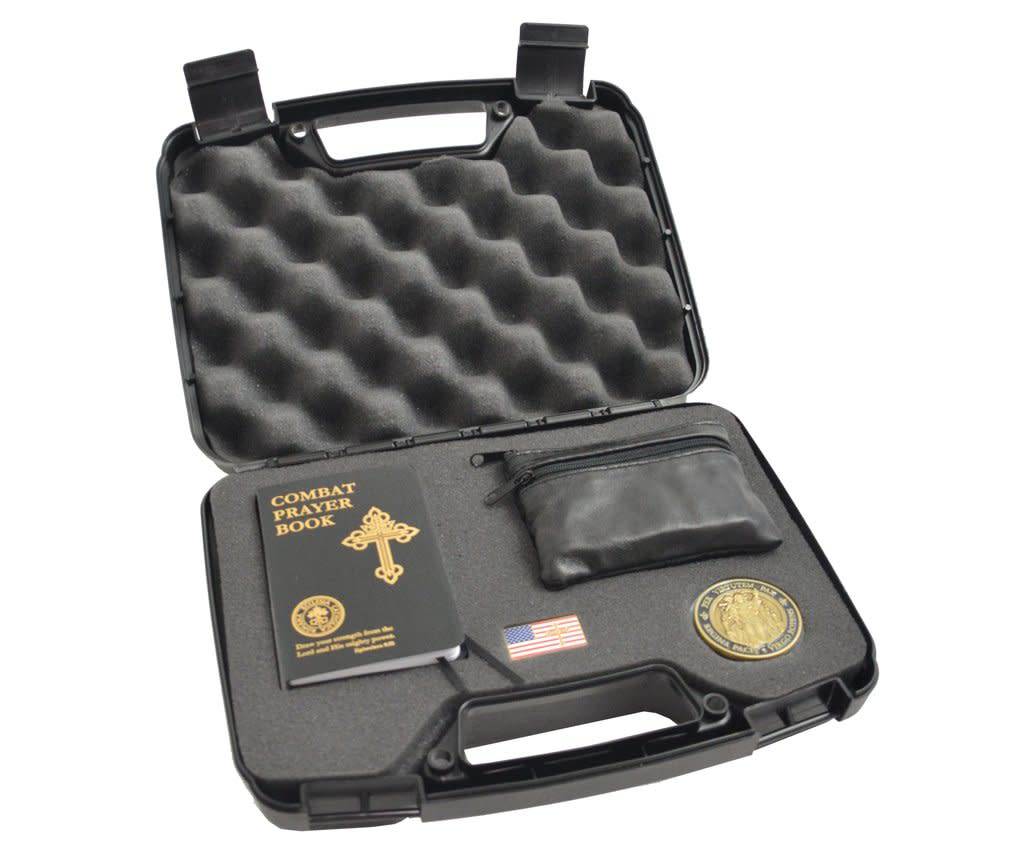 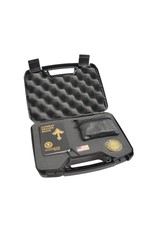 The “Peace Through Strength Case” comes in a real gun case. Padre Pio’s famous words, “Bring me my weapon” are inscribed on the gun case, to remind us that these are truly the best weapons of spiritual warfare. The case can also be used for a revolver by simply flipping the foam.

Peace Through Strength Challenge Coin – Challenge Coins date back to WWI (some say as far back as the Roman Empire) and were meant to be a sign of camaraderie in facing the demands of some particular challenge. In most cases, it would be military units during a wartime period.

The “Peace Through Strength Challenge” is about our resolve to become strong in God’s supernatural power; the only power capable of defeating the satanic forces of evil (Ephesians 6:10-12).

On the front of the coin, the image of Our Lady comes from a famous sculpture entitled “Regina Pacis” (Queen of Peace) found at the Basilica di Santa Maria Maggiore in Rome. The sculpture was commissioned in 1918 by Pope Benedict XV during WWI. That means this is the 100th anniversary of this beautiful sculpture. The titles for Mary on the Challenge Coin are both Regina Pacis (Queen of Peace) and Virgo Potens (Virgin Most Powerful). Fr. Chad Ripperger has asked all of us to call out to Mary under this title of Virgo Potens, as we face this fierce spiritual battle in our times. Together, the two titles for Mary point to “Peace Through Strength” which is inscribed in Latin on the Challenge Coin: “Per Virtutem Pax” (Peace Through Strength).

On the side of the coin, at twelve o’clock, is the first word the priest prays as he approaches the altar to offer the Traditional Latin Mass: “Introibo,” which translates to “I will go in.” At six o’clock, on the side of the Challenge Coin, are the words, “I’m Going In,” which is the battle cry of every warrior who accepts the challenge of putting their very life on the line in battle.

Patriot Combat Rosary – This is the “authentic” Combat Rosary originally designed by Father Richard Heilman, who was inspired to design this Combat Rosary based on the 1916 WWI US Government military issue pull chain service rosary. The Pontifical Swiss Guard (who guard the Pope) now, daily, carries Father Heilman’s authentic Gun Metal Combat Rosary, as their official rosary. Father Heilman designed this Combat Rosary to use the most powerful of sacramentals by adding the Benedict Medal and Pardon Crucifix, which makes it a powerful spiritual assault weapon against evil forces.

The Patriot Combat Rosary is unique in that the centerpiece is designed in the shape of the United States of America, as we are called to pray for our country and ask God to Make America Holy Again! The images and inscriptions match those found on the Peace Through Strength Challenge Coin, described above.

“Dog tags” is an informal term for the identification tags worn by military personnel, because of their resemblance to animal registration tags. The tags are primarily used for the identification of dead and wounded soldiers. In a sense, the Brown Scapular (or Scapular Medal) is our “Catholic Dog Tag.” The Brown Scapular, revealed to St. Simon Stock in 1251, was a way for us, upon our death, to be identified as a child of God. Our Lady of Mt. Carmel said, “This will be the sign of the privilege that I have obtained for thee and for the children of Carmel; whoever dies clothed with this habit will be preserved from the eternal flames.”

Peace Through Strength Lapel Pin – This lapel pin follows the model of the Secret Service lapel seen worn, especially, by many public servants. The only difference is replacing the Secret Service star emblem with the Cross of Christ. In essence, we are “Christ’s Special Forces,” who are given a special mission to wield the very force of supernatural grace in a fallen world, especially in our own nation.

Combat Prayer Book – The Combat Prayer Book is inspired by the original World War II pocket prayer book, My Military Missal. Even down to the size and appearance of the original World War II prayer book. The Combat Prayer Book contains just about every prayer essential for keeping and maintaining a strong Catholic prayer life. Packed into this tiny pocket prayer book are many, many typical Catholic prayers, including the Seven Daily Habits of Prayer, the Holy Rosary, Prayers for Mass, Prayers Before the Blessed Sacrament, Manner of Making a Confession, Stations of the Cross, and much more.

Basic Training in Holiness Book - The 54 Day Basic Training in Holiness, along with its companion, Combat Prayer Book, are both inspired by the original World War II pocket prayer book, My Military Missal. The daily reflections in this handbook are this basic training. Drawing from the truths found in the Holy Scriptures, the saints, and the Catechism of the Catholic Church, the first 27 days focus upon the qualities of excellence toward which we are all called to strive. The second 27 days contain excerpts from Fr. Richard Heilman’s book Church Militant Field Manual: Special Forces Training for the Life in Christ.